In the world of sensing, there are many sensors that change their resistance value based on the environment. Knowing the sensor resistance provides a measurement of the environment being measured. These variable resistor sensors include:

Thermistors are variable resistors that are more sensitive to temperature changes then a standard circuit resistor. The simple first order thermistor relationship between resistance and temperature is:

where
T is absolute temperature (in kelvins)
R is the resistance (in ohms)
a, b, and c are coefficients

NTC thermistors can also be characterized with the Β (beta) parameter equation, which is just a specialized case of the Steinhart-Hart equation.

Remember that a voltage divider is two series resistors in this case connecting power and ground. The voltage between the two resistors is given by:

Generally NTC thermistors have a nominal resistance at 25oC. Most common is either 10K or 100K ohms. When picking the known resistor R1, the value should match the nominal thermistor resistance, e.g. for a 100K thermistor, R1 should be 100K.

Using an embedded controller like an Arduino UNO or Nano, the code is very simple to convert the sensed input voltage to the thermistor resistance, to a temperature as shown in following code segment.

One way to solve this problem is to use a voltage follower op amp circuit. This circuit provides unity gain (voltage divider Vout equal op amp Vout), has a low output impedance, and very large input impedance. It is important to select an op amp that has stable unity gain.

Recently I published a Fitbit app that calculates the Moon phase and then displays the proper phase image and illumination value. The user can select a different date or simply increment the date using buttons. Some feedback I received was that the app was fast and they wanted to understand why?

First, the app performs all calculations on the watch. No phone resources are need No GPS. No Internet. The calculations are based on a dateNow date object (this object is settable by the user though the interface that is not part of this discussion).

The calculation is based on an article I found by SubsySTEMs while performing an Internet search. Their paper broke the Moon phase calculation into a series of steps, which was easy to follow and translated directly to JavaScript. The output of their calculation is the number of days since the last New Moon. From there the Moon phase is determined. There are eight Moon phases (in order from New):

Using the days since the last New Moon you can find the phase but beware, each phase isn’t just 1/8 of 29.53 days. Shown below is the JavaScript that implements the attached paper. 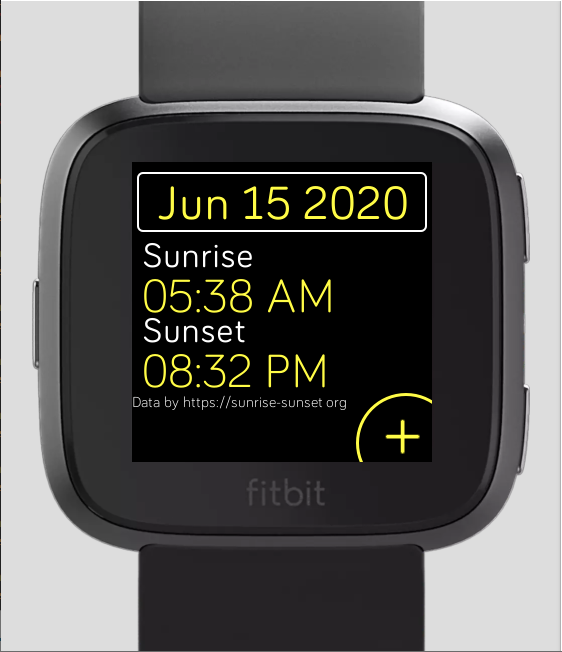 Anyware, LLC Fitbit app for displaying the sunrise and sunset times were approved and published on the Fitbit Gallery.

Anyware, LLC Fitbit apps for Poker Hand ranks and Moon Phases were approved and published on the Fitbit Gallery.

The moon phases app displays the current moon phase and illumination percentage for the given date. The initial date displayed is the current date. The date display is a button that allows the user to select a different date for the moon phase, or the user can push the increment button to advance to the next date. This app uses no external resources and no user data is saved or transmitted.

In the next update to my book, AC/DC Principles and Applications, I plan to add a small section on the Node Method to Chapter Nine – Complex Network Analysis Techniques. Discussed in this chapter are Kirchoff’s voltage and current laws, superposition, Thevenin’s and Norton’s theorems. This post is an advance installment of the update.

The Node Method is a circuit analysis approach that uses the circuit element properties with Kirchoff’s voltage and current laws. This method helps to reduce analysis complexity as seen in the example.

Each element connection point is a circuit node. In using the Node Method, each node voltage is label with one node being selected as ground or 0 volts. Each node also has the current labeled showing the currents entering and leaving each node.

Using the set of KCL equations, solve for the missing information.

This solution was simpler than creating the KVL for each loop, solving for I1, I2, and then IL, and then finding the node voltage e.